I am very pleased to have published my chapter on revisioning Sherlock Holmes through the character of Mrs Hudson, in a new book just published in the Palgrave Crime Files series. The book is edited by Sam Naidu and is called Sherlock Holmes in Context.  I have just received my contributor's copy of the book.  Here is a picture of the cover image, featuring the iconic fashion accessories we have come to associate with the Sherlock Holmes character: 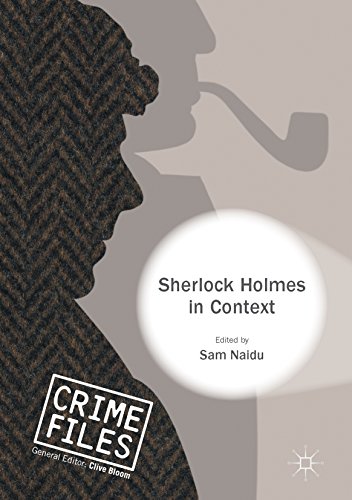 Palgrave's summary of the book describes it as follows:

"This book of interdisciplinary essays serves to situate the original Sherlock Holmes, and his various adaptations, in a contemporary cultural context. This collection is prompted by three main and related questions: firstly, why is Sherlock Holmes such an enduring and ubiquitous cultural icon; secondly, why is it that Sherlock Holmes, nearly 130 years after his birth, is enjoying such a spectacular renaissance; and, thirdly, what sort of communities, imagined or otherwise, have arisen around this figure since the most recent resurrections of Sherlock Holmes by popular media?  Covering various media and genres (TV, film, literature, theatre) and scholarly approaches, this comprehensive collection offers cogent answers to these questions."

My chapter is entitled "I, Too, Mourn the Loss": Mrs. Hudson and the Absence of Sherlock Holmes.  This is a synopsis I wrote of the chapter, which can be found on the Springer website:

"This chapter examines the representation of Mrs. Hudson in selected episodes of Sherlock and the 2011 short story “The Adventure of the Concert Pianist” by Margaret Maron, focusing particularly on the questions raised by the representation of ageing female characters, agency, and detection in popular culture. Drawing on a range of critical approaches, the analysis focuses on the similarities and contrasts offered by the two texts, and reflects on the implications for the depiction of Mrs. Hudson in contemporary reimaginings of Sherlock Holmes. The chapter concludes that, despite energetic attempts to revitalize Mrs. Hudson’s character, especially by Maron, the issue of Mrs. Hudson’s representation, and the trivialization of ageing femininity in popular culture, remains pertinent." 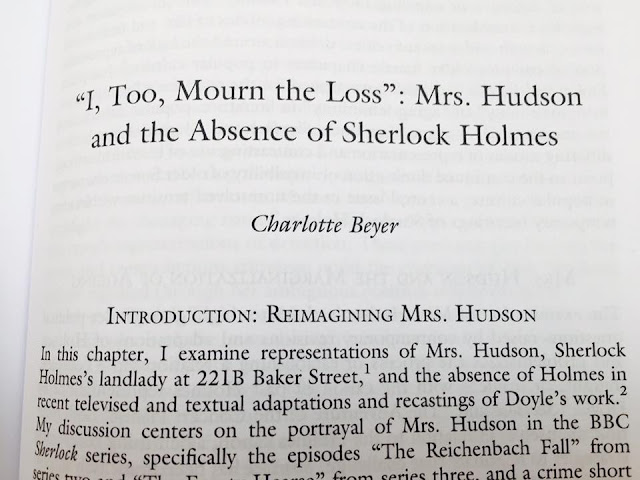 The entire book - Sherlock Holmes in Context - is really interesting, and a must-read for anyone interested in the many manifestations of Sherlock Holmes and our continued fascination with this figure.

In writing this chapter, I enjoyed having the opportunity to write about Margaret Maron's brilliant short story “The Adventure of the Concert Pianist”, and to have been able to explore at some length the gender-political dimensions of the character of Mrs Hudson and her representation.  I was particularly interested in exploring ideas of femininity, ageing, and detection in both Maron and the BBC series Sherlock.

In fact, Series Four of Sherlock almost seemed to incorporate a response to my critique in the chapter!  It certainly attempted to reimagine Mrs Hudson as a much more "badass" character.  Although my criticism still stands:  the producers may have attempted to "sex up" Mrs Hudson, but that reimagining did specifically not include taking a lead in detection. The domain of detection remained resolutely male.  Margaret Maron's short story seeks to challenge the ways in which the definition of detection embodied by Sherlock Holmes serves to marginalise female characters and issues of ageing. 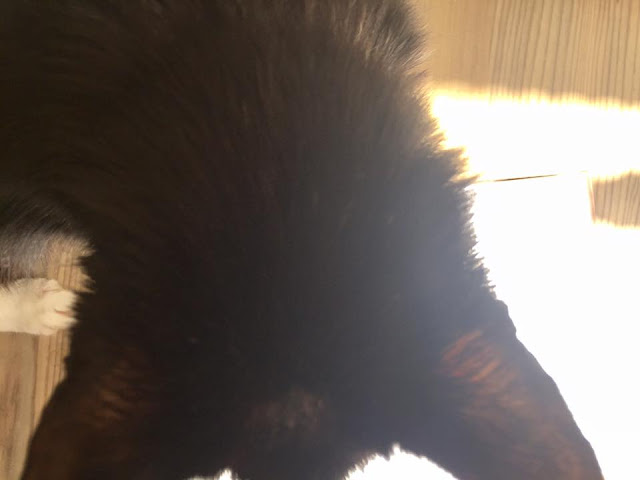 I also taught Maron's story for the first time this year on my Crime Fiction module, which went really well and made for some interesting discussions in the seminar about the perspectives and angles used by various writers in reworking Sherlock Holmes' character or Conan Doyle's stories.

My research into the figure of Mrs Hudson in Maron's story and Sherlock first saw the light of day three years ago.  Yesterday was three years ago to the date that I gave the paper that my chapter eventually was based on.  I gave that paper at the highly successful New Directions in Sherlock conference at UCL, organised by the two brilliant Sherlock specialists, Dr Tom Ue and Dr Emily Garside.  The conference was immensely interesting, as you can see from the programme here and here, and was attended by 300 delegates.  The conference even caught the eye of the newspaper The Times. The paper featured an article about the conference the day after it was held, with the title of "‘Loungers and idlers’ meet for 100 lessons on Sherlock Holmes".

Three years later, my paper has finally appeared in print which is very satisfying.  I have previously published on contemporary literary reworkings of Sherlock Holmes, in an article for a special issue on Conan Doyle by the journal Oscholars. I am hoping to do more work in the future on Sherlock Holmes reimaginings.

I am pleased to have recently published another book chapter.  My chapter examines a book which I really admire, A.S. Byatt's Ragnarok: The End of the Gods.  My chapter forms part of a collection of essays, entitled War, Myths, and Fairy Tales, edited by Sara Buttsworth and Maartje Abbenhuis. The book is published by Palgrave. 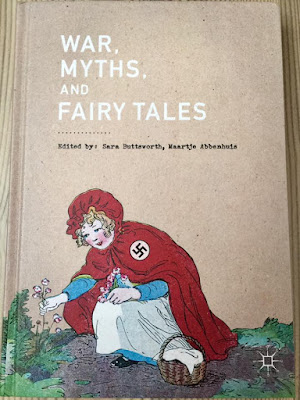 The subject matter of the book is described on the publisher's website in the following words. The volume examines "the relationships between warfare, myths, and fairy tales, and explores the connections and contradictions between the narratives of war and magic that dominate the ways in which people live and have lived, survived, considered and described their world."

My chapter is entitled '"Life was a State in Which a War Was On": A.S. Byatt's Portrayal of War and Norse Mythology in Ragnarok: The End of the Gods.  My chapter investigates A.S. Byatt's portrayal of the Second World War through the prism of Norse myth.

I was especially interested in the way in which Norse myth informed Byatt's representations of inner landscapes to contrast with her depiction of suburban settings later on in the novel. Being Danish, Norse myth in many ways feels so familiar as to be second-nature to me. Yet, in reading Byatt's novel and its retelling on Norse myth, I found myself fascinated once again by these compelling stories and characters. A few years ago, I used to teach Norse myth on a first-year module, and it was always really interesting to see what students made of this material. 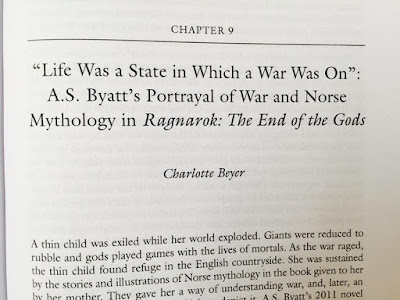 It was fascinating to research and to write about the representation of war in literature.  As a contemporary literature specialist, I was glad to have the opportunity to reflect on the ways in which British literature has depicted this subject matter over time.  From Graham Greene's The End of the Affair to Sarah Waters' The Nightwatch, the Second World War has often been imagined through the eyes of adult characters in fiction.  In contrast, I found that Byatt's novel creates a compelling narrative of war experienced by a child, and that Ragnarok: The End of the Gods gave a compelling account of the role and function myth and fairy tales may play in facilitating the imaginary and emotional process of narrating war.
Posted by Dr Charlotte Beyer at 17.2.17 No comments: